Religion In the Confederate Army by James Hugh McNeilly 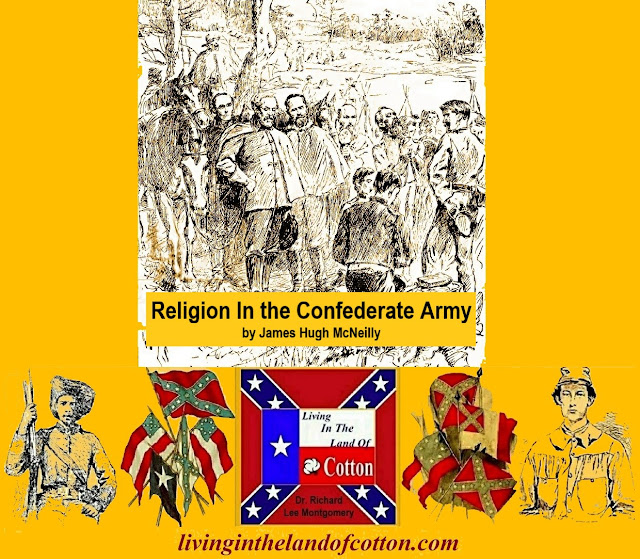 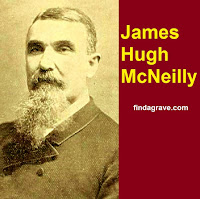 It is remarkable that in the general histories of the great war of 1861-65 between the States, as far as I have seen, there is scarcely a reference, certainly not even a meager account, of one of the most wonderful features of the war—viz., the great revivals of religion that prevailed in the armies of the Confederacy, especially in 1863 and 1864. Yet these profound religious movements did more than anything else to support and encourage the devotion of our people to their cause amid sufferings and sacrifices. And the same religious spirit enabled them to bear with patience their defeat and to set them selves to rebuild from the wastes and ruin of the war.

I have seen two detailed histories of those revivals—one by Rev. J. William Jones, Chaplain General of the U. C. V., entitled "Christ in the Camp"; the other by Rev. Dr. W. W. Bennett, of Richmond, Va., entitled "A Narrative of the Great Revival Which Prevailed in the Southern Armies." These authors were chaplains in the Army of Northern Virginia; (both were distinguished ministers of the Baptist Church. While these histories naturally are largely taken up with the work in our Virginia army, in which the writers served, by extensive correspondence and examination of newspapers they gathered a satisfactory account of the revivals in our Army of Tennessee and the Trans-Mississippi Department.

In recent years doubts have been expressed in some news papers as to the genuineness of the professed conversions and as to the type of piety resulting from those revivals; and also there have been aspersions on the character of the men who served as chaplains in the Southern armies. They have been charged with shirking dangers and hardships and of seeking easy places about headquarters. So I propose to give a brief account of the great spiritual work of those days in which I personally took part.

My connection with the army began at Fort Donelson in the fall of 1861, just after my graduation at the theological school, and I enlisted as a private soldier in the 49th Tennessee Regiment of Infantry. I was detailed to serve as chaplain, and was without a commission until January, 1864, when I was commissioned by the War Department. I was with my regiment at Port Hudson, in the campaign for the relief of Vicksburg, next to Mobile, then in the North Georgia campaign of 1864, and in Hood's advance to and withdrawal from Tennessee, being in the rear guard of that disastrous retreat. In March, 1865, being partially blind, I was assigned to duty as chaplain of the post at Tuscaloosa, Ala., where I was paroled May 20, 1865. I lived the life of a private soldier, having my mess with the men. I went into every action with them. I preached at every opportunity and ministered to the sick and wounded in hospital, in camp, in the trenches, and on the battle field. I saw the effect on men's conduct of the religion of Jesus Christ when they accepted him as a personal Saviour.

Of course the ministers of the gospel as chaplains were the leaders in religious work. There were two classes of these: those commissioned by the government and those appointed as missionaries by the Churches, when all the denominations sent their best men to this service. The chaplains were under military orders and stayed with their commands; the missionaries came and went to various commands as needed. While occasionally one might be found who was lazy or shirking or self-seeking, yet I never saw a nobler body of men, earnest, devoted, consecrated, self-sacrificing for the welfare of the men. They preached the gospel in its purity and simplicity. When we were in camp or in winter quarters they held services almost continuously, and they were diligent in hospitals and infirmaries looking after the sick and the wounded. They secured religious literature for distribution among the men. .Many of them became efficient helpers to the surgeons, especially after battles. I carried my canteen of whisky, my bottle of morphia and rolls of bandages, and on the field I could relieve pain, start reaction, and bind up a minor wound until the surgeon could attend it. The men appreciated a faithful chaplain; and however careless and in different to religion a soldier might be, I never saw one but who was glad to see the preacher when he was seriously wounded.

An effective help to religious work was the influence, the example, and the active cooperation of many of our officers of every grade, from the company lieutenant to the general in command. A very large proportion of our officers were men of piety, officers in their home Churches. Not only were Generals Lee and Jackson men of pronounced Christian character, for which they were conspicuous, but a great many generals in all of our armies were active workers for Christ and did all they could to promote the spiritual welfare of the men, giving every facility to the chaplains to hold services and at tending in person. Many of the officers were ministers of the gospel. Lieutenant General Polk, bishop of the Episcopal Church, several brigadier generals, and many colonels and captains preached on occasion.

There were a great many earnest, zealous Christians among the private soldiers, and they were very efficient helpers. By their prayer meetings, Sunday schools, and singing they aroused and maintained interest in religion. They attended the regular preaching service in great numbers, and would speak personally to their comrades, urging acceptance of Christ. One of my chief helpers was a giant who sang and by his singing gathered my congregation.

There was a delightful spirit of harmony among the ministers of all denominations, which also pervaded the ranks. As frequently as was convenient the chaplains met together to report their work and discuss plans and arrange to help each other. When we were in winter quarters or in camp for any considerable time, certain places were designated for religious service. The men would build arbors or even large rooms where they could meet not only for preaching, but for reading, writing, discussions, or general comradeship. When we were in the trenches, as at Atlanta, services were held a night just in the rear of the lines. Sometimes men were killed in these congregations by a stray bullet or shell. The order of service was much like that at an old-fashioned camp meeting—singing, prayer, preaching, exhortation, calling on those interested to rise, and personal counsel with the anxious. I have had fifteen hundred in the audience, and from two hundred to three hundred would rise asking for prayer.

Of course many professions turned out vain, but I am confident that the large majority were really converted, as they showed it throughout their lives. Many were killed in battle or died in hospitals, cheered by the eternal hope. Many went through the war and on returning home became active members of the Churches, living and dying in the faith. A number of them became ministers of the gospel.

While the Southern people bow in submission to the will of God in the defeat of their effort for an independent and separate government, we should find compensation in the evidences of God's favor to us in the mighty spiritual uplift beginning with religious lives in the army.