A Diary From Dixie by Mary Boykin Chestnut 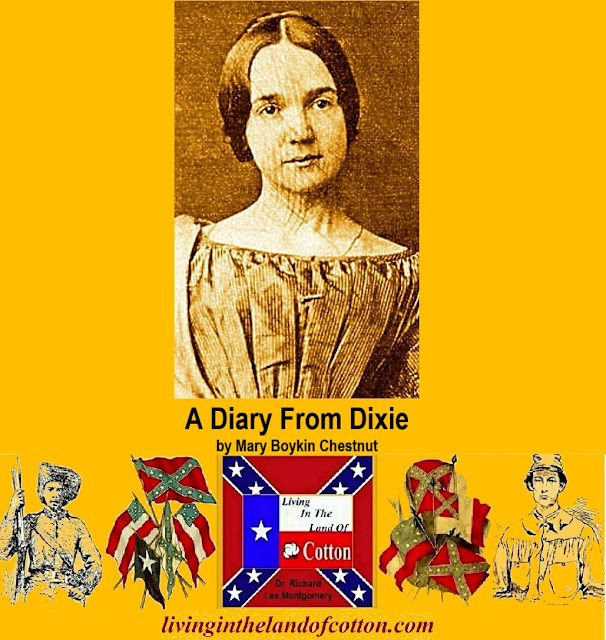 S. C., November 8, I860. Yesterday on the train, just before we reached Fernandina, a woman called out: "That settles the hash." Tanny touched me on the shoulder and said: "Lincoln's elected." "How do you know?" "The man over there has a telegram.''

The excitement was very great. Everybody was talking at the same time. One, a little more moved than the others, stood up and said despondently: ''The die is cast; no more vain regrets; sad forebodings are useless; the stake is life or death." "Did you ever!" was the prevailing exclamation, and some one cried out: "Now that the black radical Republicans have the power I suppose they will Brown 1 us all.'' No doubt of it.

I have always kept a journal after a fashion of my own, with dates and a line of poetry or prose, mere quotations, which I understood and no one else, and I have kept letters and extracts from the papers. From to-day forward I will tell the story in my own way. I now wish I had a chronicle of the two delightful and eventful years that have just passed. Those delights have fled and one's breath is taken away to think what events have since crowded in. Like the woman's record in her journal, we have had "earthquakes, as usual" daily shocks.

At Fernandina I saw young men running up a Palmetto flag, and shouting a little prematurely, "South Carolina has seceded!" I was overjoyed to find Florida so sympathetic, but Tanny told me the young men were Gadsdens, Porehers, and Gourdins, 2 names as inevitably South Carolinian as Moses and Lazarus are Jewish.

From my window I can hear a grand and mighty flow of eloquence. Bartow and a delegation from Savannah are having a supper given to them in the dining-room below. The noise of the speaking and cheering is pretty hard on a tired traveler. Suddenly I found myself listening with pleasure. Voice, tone, temper, sentiment, language, all were perfect. I sent Tanny to see who it was that spoke. He came back saying, "Mr. Alfred Huger, the old postmaster. ''He may not have been the wisest or wittiest man there, but he certainly made the best after supper speech.

December 10th. We have been up to the Mulberry Plantation with Colonel Colcock and Judge Magrath, who were sent to Columbia by their fellow-citizens in the low country, to hasten the slow movement of the wisdom assembled in the State Capital. Their message was, they said:

"Go ahead, dissolve the Union, and be done with it, or it will be worse for you. The fire in the rear is hottest." And yet people talk of the politicians leading! Everywhere that I have been people have been complaining bitterly of slow and lukewarm public leaders.

Judge Magrath is a local celebrity, who has been stretched across the street in effigy, showing him tearing off his robes of office. The painting is in vivid colors, the canvas huge, and the rope hardly discernible. He is depicted with a countenance flaming with contending emotions rage, disgust, and disdain. We agreed that the time had now come. We had talked so much heretofore. Let the fire-eaters have it out. Massachusetts and South Carolina are always coming up before the footlights.

As a woman, of course, it is easy for me to be brave under the skins of other people; so I said: ''Fight it out. Bluffton 3 has brought on a fever that only bloodletting will cure." My companions breathed fire and fury, but I dare say they were amusing themselves with my dismay, for, talk as I would, that I could not hide.

At Kingsville we encountered James Chesnut, fresh from Columbia, where he had resigned his seat in the United States Senate the day before. Said some one spitefully, "Mrs. Chesnut does not look at all resigned." For once in her life, Mrs. Chesnut held her tongue: she was dumb. In the high-flown style which of late seems to have gotten into the very air, she was offering up her life to the cause.

We have had a brief pause. The men who are all, like Pickens, 4 "insensible to fear," are very sensible in case of small-pox. There being now an epidemic of small-pox in Columbia, they have adjourned to Charleston. In Camden we were busy and frantic with excitement, drilling, marching, arming, and wearing high blue cockades. Red sashes, guns, and swords were ordinary fireside accompaniments. So wild were we, I saw at a grand parade of the home-guard a woman, the wife of a man who says he is a secessionist per se, driving about to see the drilling of this new company, although her father was buried the day before.

Edward J. Pringle writes me from San Francisco on November 30th: "I see that Mr. Chesnut has resigned and that South Carolina is hastening into a Convention, perhaps to secession. Mr. Chesnut is probably to be President of the Convention. I see all of the leaders in the State are in favor of secession. But I confess I hope the black Republicans will take the alarm and submit some treaty of peace that will enable us now and forever to settle the question, and save our generation from the prostration of business and the decay of prosperity that must come both to the North and South from a disruption of the Union. However, I won't speculate. Before this reaches you, South Carolina may be off on her own hook a separate republic."

December 21st. Mrs. Charles Lowndes was sitting with us to-day, when Mrs. Kirkland brought in a copy of the Secession Ordinance. I wonder if my face grew as white as hers. She said after a moment: ''God help us. As our day, so shall our strength be.'' How grateful we were for this pious ejaculation of hers! They say I had better take my last look at this beautiful place, Combahee. It is on the coast, open to gunboats. 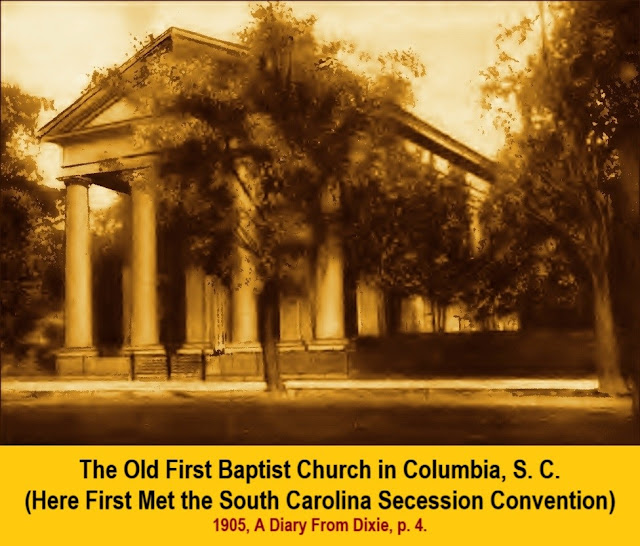 We mean business this time, because of this convocation of the notables, this convention. 5 In it are all our wisest and best. They really have tried to send the ablest men, the good men and true. South Carolina was never more splendidly represented. Patriotism aside, it makes society delightful. One need not regret having left Washington.

December 27th. Mrs. Gidiere came in quietly from her marketing to-day, and in her neat, incisive manner exploded this bombshell: ''Major Anderson 6 has moved into Fort Sumter, while Governor Pickens slept serenely. ''The row is fast and furious now. State after State is taking its forts and fortresses. They say if we had been left out in the cold alone, we might have sulked a while, but back we would have had to go, and would merely have fretted and fumed and quarreled among ourselves. We needed a little wholesome neglect. Anderson has blocked that game, but now our sister States have joined us, and we are strong. I give the condensed essence of the table-talk: ''Anderson has united the cotton States. Now for Virginia!" "Anderson has opened the ball.'' Those who want a row are in high glee. Those who dread it are glum and thoughtful enough.

A letter from Susan Rutledge: "Captain Humphrey folded the United States Army flag just before dinnertime. Ours was run up in its place. You know the Arsenal is in sight. What is the next move? I pray God to guide us. We stand in need of wise counsel; something more than courage. The talk is: 'Fort Sumter must be taken; and it is one of the strongest forts.' How in the name of sense are they to manage? I shudder to think of rash moves."

1   A reference to John Brown of Harper's Ferry.

2   This and other French names to be met with in this Diary are of Huguenot origin.

3   A reference to what was known as "the Bluffton movement" of 1844, in South Carolina. It aimed at secession, but was voted down.

5   The Convention, which on December 20, 1860, passed the famous Ordinance of Secession, and had first met in Columbia, the State capital.

6   Robert Anderson, Major of the First Artillery, United States Army, who, on November 20, 1860, was placed in command of the troops in Charleston harbor. On the night of December 26th, fearing an attack, he had moved his command to Fort Sumter. Anderson was a graduate of West Point and a veteran of the Black Hawk, Florida, and Mexican Wars.