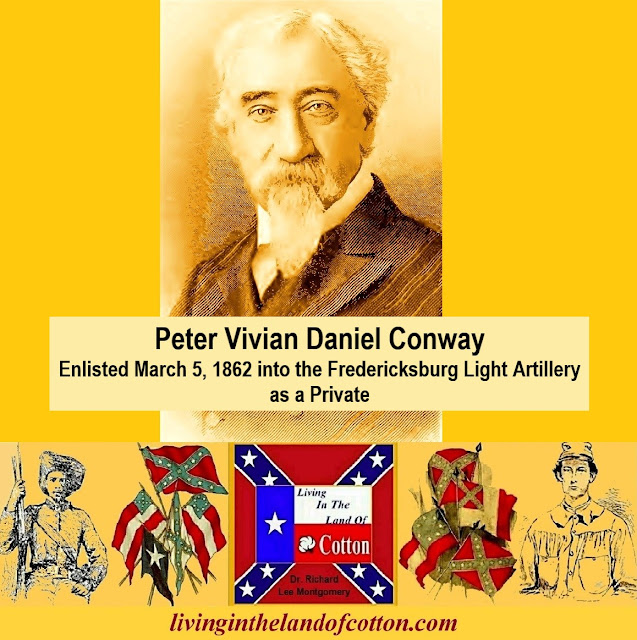 CONWAY, PETER VIVIAN DANIEL, banker, was born in Falmouth, near Fredericksburg, Virginia, November 18, 1842. His father, Walker Peyton Conway, was a banker before him, and was a very prominent citizen of Stafford county. He was for thirty-two years, presiding justice of the old county court, and also represented the county in the legislature. He was a man of sound judicial mind, of strict integrity, and of more than ordinary ability as a financier. From him, the subject of this sketch inherits both the moral and the business qualities that have put him among the most prominent men of the state.

W. P. Conway married Margaret Eleanor Daniel, also of Stafford county, of the well-known family that has been so prolific in distinguished men. From his eminent kinsman, Judge Peter V. Daniel, a justice of the Supreme Court of the United States, P. V. D. Conway derives his Christian name. Mrs. Margaret Daniel Conway was a typical old Virginia matron. She exerted a marked influence upon her son in the formative period of his life, inspired him with high ideals, talked proudly though not arrogantly of the family history, and urged her boy to live worthy of their great traditions.

Mr. Conway's earliest American ancestors were Edwin Conway, who came from Wales in 1640 and settled in Lancaster county, Virginia; William Daniel, who came from England in 1669, and established himself in Middlesex county, Virginia; and William Stone, who emigrated from England to Accomack county, Virginia, and became governor of Maryland. Of these the last is best known to history. He led a colony of Puritans from Virginia to Maryland, was appointed by Lord Baltimore governor of the province, soon came into avowed collision with the famous William Claiborne, and was totally crushed in the battle of the Severn. William's great-grandson, Thomas, was an eminent patriot during the Revolutionary period, signed the Declaration of Independence on behalf of Maryland, and, after independence was achieved, served prominently in congress.

Another distinguished ancestor of Mr. Conway was Dr. John Moncure Daniel, who was a surgeon in the United States army during the war of 1812.

The subject of this sketch was educated in local academies. Shortly after he left school, the war tocsin sounded; he answered the call of his state, and entered the Confederate army. He served three years under Lee and his great lieutenants, and left Appomattox with nothing but health and honor. Shortly after the fall of the Southern Confederacy, Mr. Conway entered business in Baltimore. Maryland, as a clerk. He "determined to do the best that was in him, and let the future take care of itself, not fearing for the outcome or result." In these phrases, we read his character. From 1865 to the present, he has been doing the best that was in him, and such are the men that stand at the front in the various occupations and professions. For nine years, he held the position in Baltimore already referred to. In 1876 he became a member of the banking house of Conway, Gordon and Garnett, in Fredericksburg, Virginia. By doing the best that was in him, and doing it every day, he put his bank among the best in the state. It is now a national bank of high standing, with Mr. Conway as its president.

Mr. Conway has never sought public office. In politics, he is a Democrat, and has never changed his political allegiance. He believes in the principles of the Democratic party, and, though it may occasionally make mistakes, he believes that that party is the best friend of American institutions.

In church preference, Mr. Conway is a Methodist. He has held positions in the Methodist church, and has represented it in Virginia, Maryland, and London, England.

Mr. Conway advises young Americans to avoid whiskey, gambling, and bad company. He urges them to be industrious, honest, truthful. To tell the exact truth under all circumstances, lie considers the greatest achievement of any man's life. No wonder that people trust P. V. D. Conway. No wonder that his bank thrives and that guardians and trustees place their trust funds in his vaults. It is to such men that Virginia points with fond maternal pride and says, " These are my jewels."

With such men in their counting-rooms, the people of Virginia can sleep calmly, while Wall street trembles to its very base.