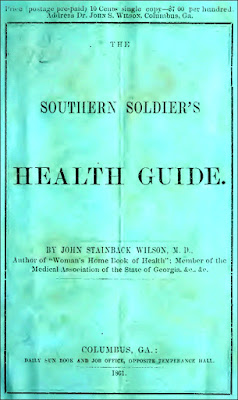 
More soldiers die of disease than of the sword. This is especially true of volunteer forces: it was exemplified in the late Mexican war, and is amply confirmed by the mortuary lists of every campaign in all countries.

The Reason Why.— Because, 1st, disease-producing causes are in constant operation, while the casualties of the battle field are only occasional. 2d. Large numbers who enter the army are not inured to the hardships and exposures of military life. 3d. Many volunteers arc wanting in that native stamina and vital resistance which are necessary to enable them to "endure hardship as good soldiers.'' 4th. All the natural and circumstantial causes of disease are intensified and made active and operative by reckless or unavoidable violations of the Laws of Health, on the part of soldiers.

Examples.— Cleanliness is neglected; stimulants are too freely indulged in; the temperature of the body is not duly regarded; the food is often improper in quality, or excessive| or deficient in quantity; the exercise is sometimes exhausting—at other times the powers are enfeebled from inaction; the hours of sleep are irregular and interrupted; the passions are too often allowed to riot in the wildest extravagancies of unrestrained licentiousness.