The Richmond Examiner During the War or the Writings of John M. Daniel by John Moncure Daniel

Wednesday, May 02, 2018
The Richmond Examiner During the War or the Writings of John M. Daniel
by
John Moncure Daniel 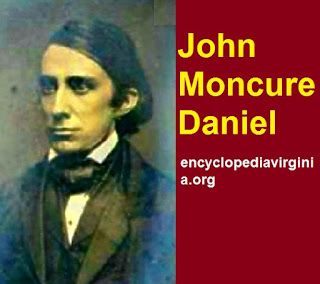 This Fourth of March, the memorable day of a memorable year, will not attain a less celebrity in future history than the Roman Ides of the same month. We stand to-day between two worlds. Here a past ends, here a future begins. The Republic of the United States on this day bids farewell to the style, the policy, the principles that have borne it in the lifetime of a man from insignificance to grandeur, from the poverty of Sparta to the wealth of Ormus or of Ind, from the footing of San Marino to equality with the British Empire. To-day we take leave of our policy and our practice, of the manners and of the men who have marked and guided the career that is ended. The line of those high personages, who will hereafter be known in history, only, as the Presidents, ends to-day; and that generation who shall learn their lives and their character from the pages of the future Gibbon who will narrate the decline and fall of the United States will compare them with the despicable tyrants whose dismal roll commences on the peristyle of the Capitol under the light of the sun now shining, as the youth of our day contrast the grand succession of Roman Consuls with the Divine Tiberius, with the Neros, with the Claudes, the Caligulas who defiled their seats and prostituted their titles, when another such day of March had separated another constitutional republic from another  disguised despotism. 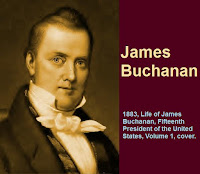 President Buchanan is the last of the family of Presidents. He was learned in their school, looked and spoke, and endeavored to act and think as they did. The historical character which he desired to leave was one like theirs, and, whatever the failure in essentials, the style and outward mould was that of the Madisons, the Monroes, the Van Burens, Tylers, Polks. We would be uncandid  to say that he has filled their

measure; for though the retiring President is one of the most distinguished figures of our day; has passed a long life in the most splendid employment; and though he must always be reckoned as one of the most eminent and celebrated statesmen of this country, it is impossible to deny that his administration has been unequal to his fame; that he has left chaos where he found order, ruin where he found prosperity; or that much of this disaster may be fairly charged to his faults of character and policy.

It is difficult to say which was the most unfortunate, his foreign or his domestic system. It is certain that the former was the least American ever followed by a Democratic President. Even Mr. Buchanan himself would probably admit that his domestic policy has not been successful. Yet few who have either spirit, intelligence, or national pride, can fail to regret the retiring President while gazing on his successor. Whatever his particular faults, in person he well represented the decency, the dignity, the decorum of the country.
To replace him in the White House, Northern Federalism has sent a creature whom no one can hear with patience or look on without disgust. We have all heard of a King of Shreds and Patches; but in the first of "Free Presidents" we have the delightful combination of a western county lawyer with a Yankee barkeeper. No American of any section has read the oratory with which he has strewn his devious road to Washington, condensed lamps of imbecility, buffoonery, and vulgar malignity, without a blush of shame. It is with a bitter pang that we remember that these samples of utter blackguardism have already gone to all the earth translated into all the languages that men speak, to justify the worst representations that our worst enemies have ever made of the national degradation to which they pretend republican government must ever lead.
But all personal antipathies are lost in the deep sentiment of apprehension which must affect every thinking man when he remembers the terrible significance of this beastly figure. Whether 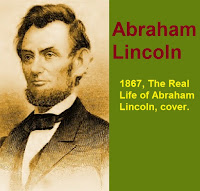 we are to be governed by a gentleman or ruled by a baboon, would matter comparatively little were each the representative of constitutional government. But with Lincoln comes something worse than slang, rowdyism, brutality, and all moral filth; something worse than all the tag and rag of Western grog-shops and Yankee factories, headed by Bob, Prince of Rails, and that successor to Miss Lane, in diamond eardrops and with ivory fan to wave over the faces of the diplomatic corps in the East-room, while urging them " not to be too warm in the cause." With all that comes arbitrary power. With all those comes the daring and reckless leader of Abolitionists, who has long proclaimed and now is effecting his purpose of destroying every federative feature of the constitution, all the peculiar characteristics of the separate State systems, to consolidate them all by mere numerical force in one grand anti-slavery community.

The new President has climbed to his place on the fragments of a shattered Confederacy, and the mere necessity of things will force him to deluge them in blood long before the Ides of another March has come again. A citizen of this State, returning to his country after an absence of years, and alighting at daybreak in the streets of its Capital, heard the bugle's reveille, the roll of drums and the tramp of armed guards there till he fancied himself back in Venice, or arriving in Warsaw. The first of the Free Presidents gets 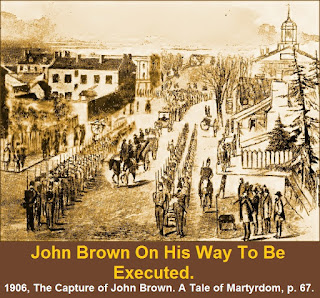 to the seat of government in the disguise of a foreigner and by the nocturnal flight of a conscience-stricken murderer in purpose; he is inaugurated to-day as John Brown was hung, under the mouth of cannon leveled at the citizens whom he swears to protect; and with the bayonets of mercenary battalions commanding every road to the fountain of mercy and justice, "What can come of all this, but civil war and public ruin?

Frederick S. Daniel, The Richmond Examiner During the War or the Writings of John M. Daniel (New York: Printed for the Author, 1868), 5-7.