Monday, May 21, 2018
The Last Confederate Soldier
by
Lucian Lamar Knight 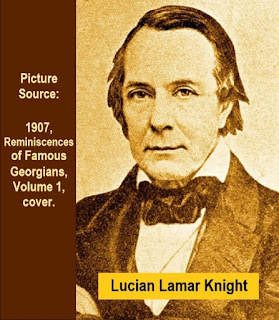 In the gray mist of the future, I catch the figure of a dying hero, the last of all his warrior band. The rest are gone. For, one by one, the grim old veterans who followed Lee, have passed from the fires of an earthly camp to the sweeter rest of an eternal bivouac.

His dreams in dying are riveted upon the old flag. He sees the figure of his chieftain and faintly murmurs: "Lee." Look! A supernatural gleam is in his eye. It must be the reflected radiance of the new morning. He hears the music of the bugle, echoing among the hills. He sees the plume of Stonewall Jackson. Listen! For, lifting himself upon his pillow, he calls to his officer beyond the starlight "I am coming, general, I am coming."

The whisper dissolves upon the air. His eyes are closed. The silence of eternity has settled on his lips. Wrap him in the tattered ensign. Place at his side the battered musket. Shroud him in his coat of gray. To the song of the lark which he .loved in his boyhood—amid the sigh of the roses which he gathered for his bride—lower him to rest in the bosom of the old land. Above his ashes lift a plain memorial and on its front inscribe this epitaph "Here lies a patriot—the last of all who followed Lee.

He left the Union to preserve the Constitution. He fought to enrich his country's flag. His ashes repose beneath this sod; but his glory survives him in the Stars and Stripes, while the spirit which nerved him in the hour of battle now strengthens at his post of duty the sleepless sentinel of the republic."