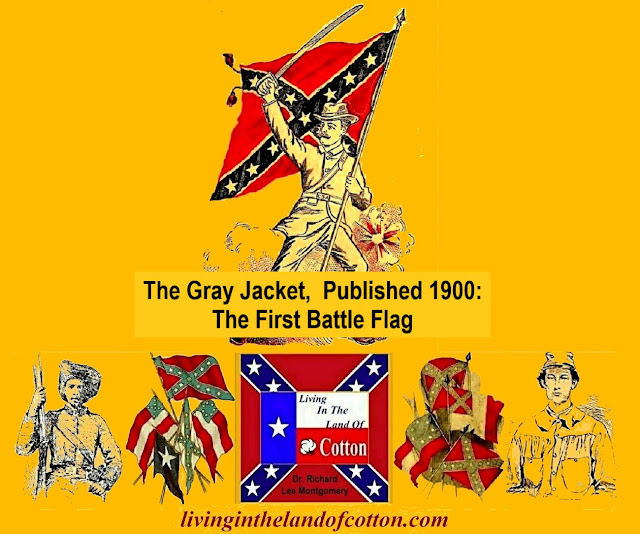 The first thrill of horror which shook this country when the news of the fight at Big Bethel was flashed through the land has hardly yet subsided. But the memory of Big Bethel has become dimmed by the many greater and more dreadful battles which rapidly succeeded it. History now barely mentions the fact of the fight there and few can tell who were the troops engaged in it.

On the 10th of June, 1861, Gen. Butler sent out troops from Fortress Monroe to attack the Confederates stationed some distance inland, Big Bethel church near the fort. They were repulsed by a small Confederate force consisting of the First North Carolina regiment and four Virginia howitzers under command of Gen. D. H. Hill. This engagement ended in a precipitate rout of the enemy.

The color company of the 1st. N. C. regiment was Company E., formerly the ''Buncombe Riflemen,'' of Asheville. The flag they carried into Big Bethel fight was the first one baptized in blood in a field engagement during the war. The flag was made by six young ladies of Asheville and presented to the Buncombe Riflemen . The flag was made of silk, the material contributed from the dresses of three of the young ladies. Miss Anna Woodfin was chosen in behalf of the young ladies to present the flag.

The flag was taken to Richmond and when Company E became the color company it became the regimental flag of the first fight of the war.

Only one Confederate was killed, that was Harry Wyatt, of the Buncombe Riflemen. He was the first field martyr of the war.

The 1st N. C Regiment was only enlisted for six months and on their being mustered out Capt. Clayton carried the flag home. Miss Anna Woodfin embroidered on the white bar the word "Bethel."

The people of North Carolina showing a commendable spirit of patriotism and delicacy of sentiment, have ordered a life size oil portrait of ymng Wyatt, and to-day it adorns the Sta,e House at Raleigh. Capt. Clayton has tendered this hallowed flag to Gov. Holt as a suitable drapery for that portrait, and it is possible that even to-day the first Confederate flag wraps the noble form of the South's first martyr.

"No history of the war would be complete without a tribute to the Confederate Women. It would be unjust to them to say that thev were simply patriotic, for while they were of all patriots the greatest, they gave the Southern cause the benefit of much more than their good wishes. No women at any time in the history of the world ever surrendered as much to any cause as did the women of the South. There have been instances where hundreds have indeed made every sacrifice, but this is the only instance where a nation of women worked and fought for a nation."

"There was undoubtedly not one woman in the entire South during the last year of the war of whom it could have been said she lived in luxury. The wife of the President of the Confederacy sold her silver for the cause. The invalid wife of the General of the Confederate army spent her small strength in knitting socks for the Confederate soldiers. Little girls occupied their play hours in picking lint for Confederate soldiers wounds. Saints—good, beautiful, patient, cheering—they proved angels on the battlefields and in the hospitals." "They starved at home in order to send their scanty food to the army." "Worn and broken by privation they wrote letters beaming with hope and gladness to the camp, and resounding defiance to the foe.''