Presentation of the Cross of Honor to Veterans of the Confederate Army Address by Mrs. Gaston Meares 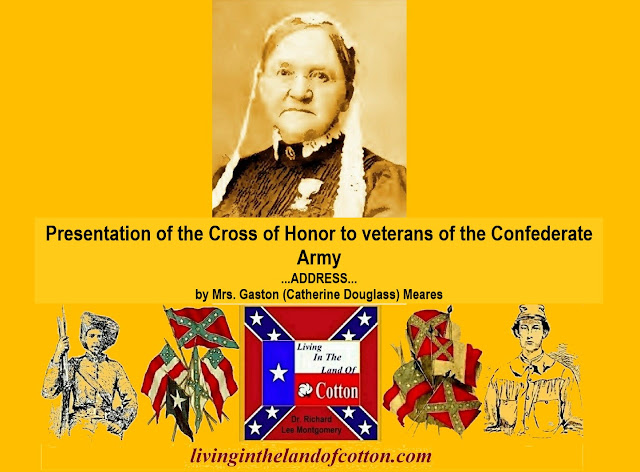 VETERANS AND HEROES OF OUR GREAT WAR FOR Southern Independence: In the name of the Cape Fear Daughters of the Confederacy, I bid you welcome on this our Confederate holiday—the birthday of Robert E. Lee!

Just forty years ago our quiet land was stirred by a great uprising of its people. The tyranny of might had forced upon us an unnatural and unwelcome war. Submission had ceased to be a virtue and at the call of their sovereign States, from every section of the South, there poured a mighty host of men going forth to meet the foe. Saying good-by to peaceful homes and all else that men hold dear, they set their faces to the front and never faltered; going out, they knew not whither, but trustful and strong in the righteousness of the cause for which they were to fight.

Four years later, with hearts quivering with woe and eyes blinded with tears, we saw the broken remnants of that great army coming back in straggling squads to ruined and desolated homes. Scarred and maimed by battle wounds, hungry and sick and destitute, branded with the cruelties of prison life, their hearts crushed and bleeding, the "Bonnie Blue Flag" trailing in the dust of conquest, our noble President in hopeless captivity, with kingly dignity wearing for his people a felon's chains in a prison cell.

Ah! those days of bitter anguish! Can they ever be forgotten? Can we wonder that "our people's hopes were dead?"

The memories of the golden deeds of those four heroic years were all that was left to us; and while you men, with greater heroism than even war had called forth, took up again the battle of life's duties, and fought it out to glorious success, we women gathered up those memories, enshrined them in our hearts, gloried in our heroes, treasured as a sacred trust the noble army of martyrs who never came back to us; and still, wiHi unswerving devotion to the cause for which they fought, we honor all who followed the banner of the Southern Cross till it was furled forever.

Let me show you a memento of those times you well remember. I have here a pair of silver cuff buttons mounted on a card for preservation, and thus inscribed: "These buttons were made from the two identical silver quarters paid to a Confederate soldier at the final distribution of specie, just prior to the surrender of General Joseph E. Johnston at Durham, N C. in 1865.

"They represent four years hard-earned pay to a weather-beaten "Confed," who had them decorated with the colors he fought under."

Ah, what a tale they tell! Such was your guerdon and reward, but 'twas all your country had left to give. And there another—(pointing to a tattered old flag full of bullet holes)—a pitiful relic, but we "treat it gently for 'tis holy"—'tis the tattered fragment of the once beautiful flag of the Third North Carolina Regiment of State troops. That was one of our own home Regiments—the one I knew most about—in which I had great personal interest. Its officers, some of whom had been members of the old "Wilmington Light Infantry, were all men of the "Free City on the Cape Fear." Its companies were recruited from New Hanover and neighboring counties. It was a gallant band and we were very proud of it, and it is something now for me to tell my grandsons (and they are "Sons of the Veterans" too) how I took their fathers, little boys then, and went with the Third to Virginia. Just too late for the first Manassas, we reached Richmond in time to hear that the cannon were booming in the distance, while we waited with bated breath for the hourly dispatches from the battle. Those were the early days—the halcyon days of hope! and when the news came of Beauregard's first great victory for the South, it was hailed with joy and acclamation, and we hoped the happy end was near at hand. But, sad omen of sadder days to come, the glad news was dashed with the inevitable war note of sorrow, for Bee and Bartow had fallen in the strife—and hundreds of the men who wore the grey lay dead upon the battle-field!

The winter followed, and with the early summer days came the advance on Richmond, and the seven days fight for its defense, and when the sun set upon that fatal field of Malvern Hill the light of many of our hearts and homes was quenched in a horror of great darkness, for Virginia's soil was watered with the precious blood of many of Carolina's noble sons.

The years rolled on; Chancellorsville and the Wilderness, Sharpsburg and Gettysburg, and scores of others wrote in letters of blood their stories of unrivaled bravery and heroism, of victory and sometimes of defeat, but never of cowardice or treachery. At last the scene shifted to our North Carolina coast. Fort Fisher, our watchful sentinel upon the outposts—the fortress we had deemed impregnable—added its chapter of superb defense and final fall, and the gates of Confederate supplies were closed!

The end soon followed at Appomattox when Lee, our own immortal Lee, surrendered to overwhelming forces his good sword—stainless as his own pure soul—unsullied as his own bright honor! Our peerless Lee! My friends, you bore an honorable part in the making of that wonderful story of the Southern Confederacy, and for that we owe you a debt of gratitude and are proud to do you honor.

Flashing across the page of history like a meteor athwart the sky, but glorious as the splendor of the noon-tide sun—all too soon the young republic went down in the darkness of disappointment and defeat. The Sun of Peace had never risen upon its mountain tops, its fertile valleys could never laugh and sing with fruitful harvests, for there were none to till the land. From first to last the men were at the front, fighting for "their homes, their altars and their sacred rights"—for the freedom they could not win!

But "in song and story it will go sounding down the ages" as one of the greatest war records the world has ever known. Unequaled and unique in many respects during its brief continuance, the story of the Confederacy would not be complete without its epilogue —for it stands alone in the world's annals for the loyalty and devotion which after nearly half a century of humiliation and subjection, of injustice and insult, still glow in the heart of every true son and daughter of the South.

Can any other country tell of a band of conquered soldiers so tenderly beloved and cherished by the people for whom they fought—and failed? Other nations have had their conquering heroes and welcomed them with triumphal processions and built their temples to victory; but our monuments are inscribed only to 'The Confederate Dead"—our processions are. the yearly pilgrimage of Memorial Day to the thousands of sacred spots that dot the land, where rest the braves who fought a good tight, and gave their lives for the cause that was lost!

Ah, deary do we love the cold dead hands that bore the banner of the Stars and Bars aloft—conquered indeed it was, but stained never, save by their own life blood. And no less do we love to honor the battle scarred Veterans who are with us to-day; sole representatives of the glories and the sorrows of the dead past.

I regard it as a crowning honor of my long life that the Cape Fear Chapter of the United Daughters of the Confederacy, have chosen me their representative to bestow upon you the Southern Cross of Honor. Simple bronze badges they are—ostentatious and of little intrinsic value—but worthy of your acceptance, and a fit inheritance for your children's children, as symbols of Confederate endurance and valor, and as tokens of woman's undying appreciation of all that is grand and heroic in men who, great in action, have proved themselves greater in defeat. Wear then these badges proudly on your breast as gifts of the women of the South who are proud to be called "Daughters of the Confederacy."

Soon life's long warfare will be ended and with your own Stonewall, the good and great, you too must "cross the river and rest under the shade of the trees." When the last reveille shall wake you from that sleep, may each one of you find an immortal crown of true victory awaiting him in the sweet and blessed country of everlasting peace!

God bless you all. Amen.

Presentation of the Cross of Honor to Veterans of the Confederate Army by Cape Fear Chapter, Daughters of the Confederacy. January 19th, 1901, Wilmington, North Carolina (Wilmington: Review Job Office Print, 1901), 1-7.