Great Southerners by Will T. Hale 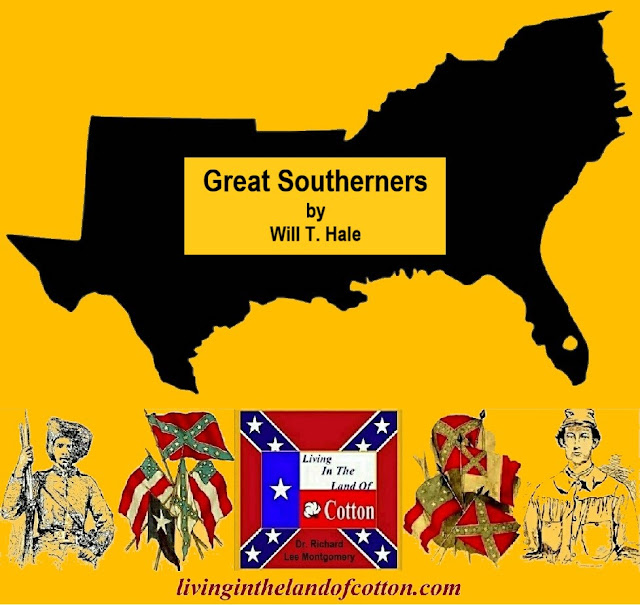 MACAULAY, referring to Burk's knowledge of India, obtained entirely from books, says that in every part of those huge bales of information, which repelled almost all other readers, his mind, at once philosophical and poetica1, found something to instruct and delight. His reason analyzed those vast and shapeless masses; his imagination animated and colored them. All India was present to the eye of his mind, from the halls where suitors laid gold and perfume at the feet of sovereigns to the wild moor where the gypsy camp was pitched; from the bazaar, humming like a beehive with the crowd of buyers and sellers, to the jungle where the lonely courier shakes his bunch of iron wings to scare away the hyenas. He had just as lively an idea of the insurrection at Benares as of Lord George Gordon's riots, and of the execution of Nuncomar as of the execution of Dr. Dodd.

This love of research among literary treasures this wonderful grasp of information was all characteristic of the subject of this paper; and is illustrated in short by the fact that sometime in 1864, while in the British Museum, he counted more than six hundred books he had read thoughtfully enough to remember the peculiar views of each individual author. Dr. Bledsoe is declared by many to have been the South's greatest intellectual giant. Whether he was all his friends claimed or not, he was a wonderful man, conspicuous for his natural capacities and his acquirements, and hardly less so for his lack of certain elements that insure the completest success. Thomas Jefferson was a great man, but some of his writings show that he bore unmanly prejudices.  Patrick Henry was a great man, but his sordid love of money was repellant. Dr. Bledsoe has his limitations, which are not referred to here for any other reason than in appreciation of the truth that the reputation that is considered paramount is in peril when it is finally discovered that it is, like other men's, not supreme.

The biographical facts of his life are these: He was born at Franklin, Ky., November 8, 1809. When only fifteen years of age he entered West Point Military Academy, was graduated in 1830, served as lieutenant in the army two years, then resigned to study law. At the end of a year he abandoned this and became Assistant Professor of Mathematics at Kenyon College, Ohio. A year later he took out orders in the Episcopal Church. In 1840 he resumed the law, practicing in Illinois. From 1848 to 1854 he was Professor of Mathematics in the University of Mississippi, where he was called to the same chair in the University of Virginia. He served awhile in the Confederate army during the war between the States, became Assistant Secretary of War in President Davis's Cabinet, resigned in 1863, and then went to England to procure material for a constitutional history of the United States which he never finished. He began the publication of the Southern Review at Baltimore in 1867, uniting with the Methodist Episcopal Church, South, in 1871, and becoming a preacher, but not a pastor, when sixty-two years of age. He died December 8, 1877.

In a discriminative article in the Quarterly Review for July, 1893, Dr. Wilbur F. Tillett gives an insight into his mission. "Whatever Dr. Bledsoe thought about at all," declares Dr. Tillett, "he thought about deeply, profoundly, ardently. His life, thoughts, and energies seem to have gone out in three directions: in the line of his chosen mathematics, in defense of the South and her institutions, and in maintaining the true doctrine of moral free agency."

His best-known published works are "Liberty and Slavery," "Is Davis a Traitor?" and ''Theodicy, or Vindication of the Divine Glory." The first, published in 1857, served its purpose well, but is not of much interest now, except to show the reasoning power of a great thinker; for the passions awakened by the subject are quiet details of it seeming to this generation concerned, as Scott's favorite quotation ran:

With things that are long enough ago,
And with Dickie Macphalion that's slain.

The second, published in 1866, is said to have caused the release of Jefferson Davis, unjustly held by the United States authorities on the charge of treason. It is a powerfully written book, demolishing the charges made against the great Confederate leader. The last-mentioned work is a vindication of the justice of God in regard to the natural and moral evil that exists under his government. It is said to be his greatest effort, and the one on which his fame will rest. As an editor he was at his best. In this position his erudition and vigor of expression came into display. He seemed informed on all subjects science, art, politics, and literature. None of the greatest editors of his day surpassed him as a writer.

He was decidedly combative. While lie did not fear criticism, it fired him to resentment. It has been said of the Jesuit that if lie was wanted at Lima he was on the Atlantic in the next fleet. If he was wanted at Bagdad, he was toiling through the desert with the next caravan. If his ministry was needed in some country where * * his life was more insecure than that of a wolf, where it was a crime to harbor him, where the heads and quarters of his brethren, fixed in the public places, showed him what to expect, he went without remonstrance or hesitation to his doom. Such courage was Dr. Bledsoe's. He uttered his convictions, though opposed by those out of the Church or in it, and when challenged he came off victor generally. His vehemence sometimes went to the extreme, however, so that there are critics who said that those who fell before him fell by the mighty battle-ax, and not the Damascus blade. This made bitter enemies often. Dr. Tillett, in the sketch referred to, tells this anecdote of him: "About 1876 or 1877 Dr. Bledsoe was fiercely assailed by Dr. R. L. Dabney in the Southern Presbyterian Review. It chanced that soon after this a friend, dropping into a barber shop at Alexandria, found Dr. Bledsoe in the toiisorial chair taking a shave. After shaking hands with him the friend remarked: 'Well, Doctor, I see Prof. Dabney is after you.' That was enough. He pushed the barber out of the way, wobbled out of the chair, and took the floor. He was just half shaved, one side of his face being yet covered with lather. He was in his shirt sleeves, and a towel was suspended from his chin. Walking the floor and gesticulating violently, he declared that he had long waited for the Lord to deliver Dabney into his hands, and now at last his prayer was answered, and he would make thorough work with him. The barber looked on with amazement, and found it no easy task to get his half-shaven customer to resume the chair, while the friend enjoyed the embarrassment, and thought the scene one of the most ludicrous and laughable he had ever seen." It may be added that Dr. Bledsoe made thorough work with Dr. Dabney.

Many stories are told of the self-conceit of distinguished men. Tennyson, in reading his own poems in a social gathering, sometimes paused to observe that a certain passage was exquisite. It is related of Gen. Winfield Scott that once, when the enemy was making a stubborn resistance, he insisted on placing himself so that they could see him well, sincerely believing that his august presence would bring dismay to the foe. James T. Fields, while traveling in Europe, was invited by Thackeray to attend some meeting and hear him make an. address. Thackeray got up to speak, said a few words, floundered, and sat down. He had forgotten his piece. He was not the least embarrassed, but, turning to Fields, expressed great pity for the audience, who had thus been deprived of one of the most masterful addresses ever promised them! Dr. Bledsoe had some of this conceit. He was learned, but not eloquent as a speaker. He was invited on one occasion to make an address at the commencement exercises of an Alabama college. An expectant crowd greeted him, composed of many distinguished men as well as the commonalty. He arose and laid down a great pile of manuscript, and for two hours read therefrom. The audience were worn out and disappointed. He seemed to notice it, but afterwards remarked to a member of the faculty: "I rather think you have overshot your audience in your speaker this commencement." He considered the want of appreciation due to the lack of intellect on the part of the audience. Dr. Bledsoe had few business qualifications and realized little from his books.