A Public, Not a Civil War by George Cary Eggleston

Thursday, May 24, 2018
The History of the Confederate War: Its Causes and Its Conduct, Volume 1
by
George Cary Eggleston 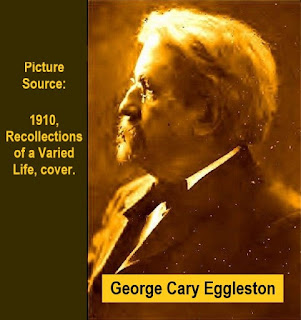 CHAPTER I
A Public, Not a Civil War

The war of 1861-65 was in fact a revolution. Had the South succeeded in the purposes with which that war was undertaken it would have divided the American Republic into two separate and independent confederations of states, the Union and the Southern Confederacy. The North having succeeded, no such division was accomplished, but none the less was a revolution wrought as has been suggested in the introductory chapter of this work.

Familiarly, and by way of convenience, we are accustomed to call this "The Civil war," in contradistinction from those other wars in which the American power has been arrayed against that of foreign nations. But the term "Civil war," as thus applied, is neither accurate nor justly descriptive. In all that is essential to definition this was a public and not a civil war and it is necessary to a just understanding of the struggle and its outcome to bear this fact in mind. Otherwise the entire attitude and conduct of the Federal government toward its antagonist must be inexplicable, inconsistent and wanting in dignity.

The Southern States asserted and undertook to maintain by a resolute appeal to arms, their right to an independent place among the nations of the earth. In the end they failed in that endeavor. But while the conflict lasted they so far maintained their contention as to win from their adversary a sufficient recognition of their attitude to serve all the purposes of public rather than civil war.

They instituted and maintained a government, with a legislature, an executive, a judiciary, a department of state, an army, a navy, a treasury, and all the rest of the things that independent nations set up as the official equipment of their national house-keeping.

Not only did foreign powers recognize their right to make war, not as rebels but as legitimate belligerents entitled to all the consideration that the laws of civilized war guarantee to nations, but the United States government itself made similar recognition of the South's status as a power possessed of the right to make war.

At the outset there was quibbling of course, and a deal of playing for position. But in view of the obvious facts all this quickly gave way to a perfectly frank recognition on both sides of the truth that there was legitimate public war between the North in the name of the Union and the South organized as the Southern Confederacy; that the struggle involved the question of the independence of the South on the one hand and the indissolubility of the Federal Union on the other; that the conflict was the result of an entirely legitimate appeal to arms for the decision of questions which no other arbitrament could decide; and that the contest must be fought out not as a struggle between constituted authority on the one hand and insurrection on the other but as a controversy between two powers, each of which was legitimately entitled to assert its contentions and to maintain its attitude by every means known to civilized war.

All this was reflected, while the war lasted, in the treatment of men captured on either side as prisoners of war ; in negotiations for the exchange of prisoners with full recognition of military rank on either side; in the issue, the observance and the enforcement of paroles; in safe conducts frequently granted and always honorably respected; in agreements for the immunity from arrest of medical officers and other noncombatants; in the humane and civilized arrangements made between opposing generals for the equal care of the wounded of either army by the surgeons of both, and in a score or a hundred other ways.

And when the war was over both sides fully recognized and emphasized its character as a legitimate public war and not in any respect as an insurrection. When the broken fragments of the organized armies of the South surrendered, there was an end of the controversy. The Southern people made no effort to prolong the struggle in irregular ways, as they easily might have done. They set their faces against all attempts to inaugurate a guerilla warfare, a thing which would have been easy to them. Under the advice of General Lee and their other great leaders the soldiers of the Confederacy accepted the surrender of the Confederate armies as a sovereign act that made an end not only of the war but of their right to make war. By their immediate return to ways of peace and by their sincere acceptance of the terms offered in Mr. Lincoln's promptly issued amnesty proclamation they marked and emphasized their view that they had been engaged, not in a disorderly insurrection, but in a legitimate, public war, the military end of which marked the end of their right to carry on hostilities of any kind or character.

Equally on the other side, the public character of the war was recognized by every act of the government. There was not even one prosecution for treason. Congress imposed upon the Southern States definite legislative duties as a condition precedent to the readmission of those states to the Union, thus emphatically recognizing the fact that during the progress of the war they had actually  been out of the Union,  and could be readmitted to it only upon terms prescribed by a congress representing those states which had remained in it. In these and a hundred other ways — and especially by means of that long military occupation of the South which ended only under the Hayes administration — the national government recognized the fact that there had been a legitimate public war between the two sections and not merely an insurrection with the military operations necessary to its suppression.

We must bear these truths in mind if we are rightly to understand the great struggle which for convenience and quite incorrectly we call the Civil war. We must remember that it was a struggle of giants; that it was a conflict between two powers, each of which was possessed of a tremendous fighting capacity; that it called forth the most brilliant strategy of modern times that it was inspired on both sides by a heroism worthy of celebration in song by the most gifted of ballad-makers; that it involved the very vitals of republican self-government among men; that it wrought a revolution more stupendous, more far-reaching and more lasting in its effects than any other in recorded history; that it overthrew old institutions and created new ones in their stead; that it reversed the history of a hundred years; that it wrote anew the fundamental law of the greatest nation of all time; that it created a new epoch and made a new national power the dominant force and influence in the ordering of human affairs.

Only by such appreciation of the nature, the magnitude and the significance of our war, shall we justly estimate its place in the record of human affairs or properly understand the meaning it is destined to carry with it into history.

It is with an abiding conviction that the story of this war is the most precious memory of all the American people, the record of their highest achievements, the supreme demonstration of their right to a foremost place among the peoples of the earth that this telling of that story is undertaken.


George Cary Eggleston, The History of the Confederate War: Its Causes and Its Conduct, Volume 1 (New York: Sturgis & Walton Company, 1910), 13-18.