The Story of Corpus Christi by Mary Augusta Sutherland 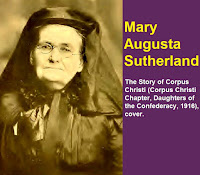 The bugle sounded and the cavalry sprang into life. Drums beat the long roll and the infantry hep, hep, to the command of its officers. Captain Wm. Maltby, with his Lieutenants McDonough and Russell, and a force of men, sailed over and fortified Aransas Pass. The ladies of the city got together and fashioned a Confederate flag. This flag was presented from the old Court House steps, to the Company of Captain Neal. The flag was presented by Miss Mary Woessner, who stood on the steps surrounded by her schoolgirl friends, all dressed in white, and the hardy warriors stood ranked below, for only warriors dwelt on the frontier of this day. The banner was presented in a neat speech, which voiced the sentiment of her hearers. A new nation had been born; here was her emblem. W. B. Wrather received the flag on behalf of the Company, and promised to carry it to victory or death. The wildest enthusiasm prevailed, and again the town was a military camp.
The blockading fleet arrived at the two Passes, Corpus and Aransas, and promptly bottled Corpus Christi. Federals landed and established camp on the southern end of Mustang Island, at Corpus Pass, over which bar they brought light draught vessels, both armies at times visiting the Islands. We quote from Confederate

Military History, Texas Volume: "On May 3, 1863. the enemy attempted to land on St. Joseph's Island, were repelled by small force commanded by Captains E. E. Hobby and B. F. Neal. Colonel A. M. Hobby, Commander at Corpus Christi, reports that the men were exposed to heavy rain and without food. They numbered sixty-four, armed with forty guns. The enemy was many, the three boats coming in single file. The first launch was captured, with six new Sharp rifles and cartridge boxes and one ammunition chest. The other boats fleeing back to the fleet; the captured boat was dragged across the Island to Aransas Bay. Of more importance was the recapture of ten bales of cotton, which had been confiscated at some point on the coast, by the enemy and placed there pending shipment North, for cotton sent to Mexican border meant shoes, clothes, food, medicines, ammunition. At that date cotton and gold were synonymous terms, with cotton slightly in the lead. To the Union Camp on Mustang went the citizens who refused to accept the Confederacy, where they were given shelter, and later transportation to New Orleans."
I am wrong in saying that all of our foreign born citizens stood by 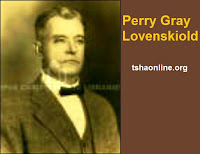 the old flag, there were notable exceptions. Of names I can call to mind are the good and old names of Von Blucher, of same family as he of Waterloo; Colonel Lovenskiold, a highly educated gentleman at one time a teacher here; John Uehlinger, for many years after the war a leading merchant; August Ricklefsen, who died many years since; Andrew Dove, a native of Bonny Scotland, and undoubtedly others whom the writer did not know. The names mentioned are all borne today in Corpus Christi by good people, representative people, hence knowledge of them.
To Corpus Pass, to run the bar for the United States Government, as Pilot, came one Captain Grant, and with him his family. After the war he remained on the Island and became a cattle raiser. His house became a landmark to all Bay folks, hunting parties and sight-seers, for its unbounded hospitality. The Captain and his good wife have gone to their reward, the children have founded homes nearer the haunts of men, and the old home, like the shallow Pass, is deserted.
The cry of the sea bird and the moan of the wave is the only sound to be heard today on the spot where half a century ago armed men and ships kept watch on a hostile coast. South of Mustang Island lies Isla del Padre, rich in legends of pirates and buried treasure, and in years agone, after a storm at sea, coins might be (and were) picked up on the Gulf shore, Spanish coins worn smooth by  the waters. They probably came from some long forgotten wreck, as it was gradually torn apart by the raging waters, mute messengers from the past, of the days when Spain held sovereignty of the Southern seas. This is the only treasure ever reported.
This Father of Islands reaches southward to the Mexican border, and to it came, in those days, traders willing to do business with either side, traders of various wares, but principally cattle dealers, not particular as to whose cattle, gathering herds on the mainland by the light of the moon, crossing them by fords across Laguna Madre, and selling them to the enemy for use of camp and fleet. The owners of the cattle objected to this traffic. An expedition was organized to capture the Mexican bandits engaged in it. They reached the vicinity of the camp and were carefully advancing when the freebooters, who had been warned by pickets, fired upon them from ambush, from the sandhills. Two men were killed by the first volley and the surprise threw the party into a panic. They gathered up their dead and began the march home. We never heard the name of one of the men killed. The other was Lawrence Dunn, and to his widow and little children came the terrible news. Mr. Dunn and wife, a few years earlier, had left all the comforts of civilization, and sought fortune in the Western wilds, and this was the parting of the young wife and husband, she alone to care for the young family.
Truly, we of this day cannot realize w^hat the women of that day suffered, one long agony of suspense and fear. Later another scouting party went down and captured two young men, deserters, making their way to the enemy. They were brought back, tried by courtmartial, and hanged to a tree, near where Mesquite Street crosses the Texas-Mexican Railroad tracks. They were buried beneath the tree, which shortly died (as trees, according to tradition, do when a human being is hanged to their branches), and the exact spot where two young lives went out in dishonor was lost trace of. 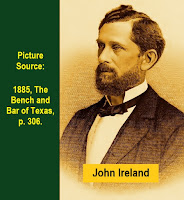 That some of the citizens did not sanction the findings of the Court was proven several years later, when the Honorable John Ireland was a candidate for Congress. Colonel Ireland had been in command of Corpus Christi at the time of the execution. During his canvass he spoke to a small audience here. The writer heard his denial of being responsible for this unfortunate happening. In his speech he said, "The man who says I had art or part in the death of these men is a liar. As Commander of this Post. I was ordered to see the sentence executed. As a soldier I obeyed orders."
He was a soldier and a patriot, and the fortune of war brought this most unfortunate episode into his hands. All this time the small garrison at Aransas Pass was holding its own against the fleet. On the 16th day of November, 1863. Colonel Bradfute with Maltby's Company of Eighth Infantry and Garrett's Battalion, boarded the steamer Cora and attempted to rescue the garrison at that point, but were not able to reach them. On November 17, after a severe fight, the brave defenders surrendered and were carried prisoners of war to New Orleans, where they remained until the close of hostilities. The way being open, the vessels entered the bay, and Corpus Christi was at their mercy.