The Soul of Abraham Lincoln by William Eleazor Barton 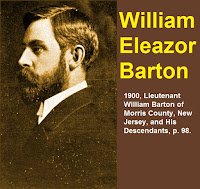 
In the chapter on the "Conditions of Lincoln's Young Manhood at New Salem "mention was made of the "book" which Lincoln is said to have written, opposed to the Christian religion, a book which his employer, Samuel Hill, is said to have snatched from his hand and thrown into the fire lest Lincoln's infidelity should ruin his political career. To have treated this subject at length would have thrown that chapter out of focus, and it is time that we should learn the truth about it.
Colonel Lamon tells us about this book thus:
"He had made himself thoroughly familiar with the writings of Paine and Volney,—the Ruins by one and the Age of Reason by the other. His mind was full of the subject, and he felt an itching to write. He did write, and the result was a 'little book.' It was probably merely an extended essay, but it was ambitiously spoken of as a 'book' by himself and by the persons who were made acquainted with its contents. In this book he intended to demonstrate,—
"First, that the Bible was not God's revelation; and
"Secondly, that Jesus was not the Son of God." —Lamon, Life of Lincoln, pp. 157-58.
Lamon wrote this in 1872 of a book supposed to have been written by Lincoln and burned by Hill in 1834. We have already quoted from Herndon's account, but it is brief and for convenience will bear reading here in full:
"In 1834, while still living in New Salem and before he became a lawyer, he was surrounded by a class of people exceedingly liberal in matters of religion. Volney's Ruins and Paine's Age of Reason passed from hand to hand, and furnished food for the evening's discussion in the tavern and village store. Lincoln read both these books and thus assimilated them into his own being. He prepared an extended essay—called by many a book—in which he made an argument against Christianity, striving to prove that the Bible was not inspired, and therefore not God's revelation, and that Jesus Christ was not the Son of God. The manuscript containing these audacious and comprehensive propositions he intended to have published or given a wide circulation in some other way. He carried it to the store, where it was read and freely discussed. His friend and employer, Samuel Hill, was among the listeners, and seriously questioning the propriety of a promising young man like Lincoln fathering such unpopular notions, he snatched the manuscript from his hands and thrust it into the stove. The book went up in flames, and Lincoln's political future was secure."—Herndon, III, 439, 440.
Mr. Herndon had already given this information to Lamon in another form, and Lamon used it in his list of certificates from Lincoln's old friends that Lincoln was an infidel.
As printed in Lamon's book, Herndon's account of the burnt manuscript was communicated in the following letter:
"As to Mr. Lincoln's religious views, he was, in short, an infidel, ... a theist. He did not believe that Jesus was God, nor the Son of God,—was a fatalist, denied the freedom of the will. Mr. Lincoln told me a thousand times, that he did not believe the Bible was the revelation of God, as the Christian world contends. The points that Mr. Lincoln tried to demonstrate [in his book] were: First, That the Bible was not God's revelation; and, Second, That Jesus was not the Son of God. I assert this on my own knowledge, and on my veracity. Judge Logan, John T. Stuart, James H. Matheny, and others, will tell you the truth. I say they will confirm what I say, with this exception,—they will make it blacker than I remember it. Joshua F. Speed of Louisville, I think, will tell you the same thing."—Lamon, Life of Lincoln, p. 489.
It is important to notice that we do not have two witnesses concerning this book, but only one. Lamon gives no evidence of having possessed any independent knowledge of the book.