The Old Guard: A Monthly Journal, Devoted to the Principles of 1776 and 1787 by Charles Chauncey Burr 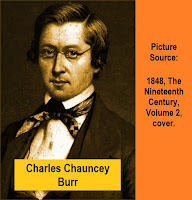 “A new phrase has lately appeared in this country, very much as Satan’s face first appeared in Paradise.—It is, ‘the war power’ as something above the Constitution, which is declared to be ‘the supreme law of the land.’ ...

What is now by ignorant or designing people called the war power, or military law, is simply the absence of all law, and rests upon the same moral basis, as what is called Lynch law, or mob law. They depend upon the same arbitrary usurpation of power, in opposition to Constitution and statute. It depends solely upon the will or caprice of the party by whom it is proclaimed and enforced. Until Mr. Lincoln's election, no man imagined that it was ever to be put in force outside of the military camp; nor was it supposed that it would ever be used even there, in violation of the express guarantees of the Constitution, It is well known that Washington, although the land was full of traitors to our revolutionary cause, totally ignored the idea of such a war power as Lincoln claims to wield.”