The Flag Still There: An Antipodean Survival Of “The Lost Cause” by Theodore F. Allen

Wednesday, April 18, 2018
The Flag Still There: An Antipodean Survival Of “The Lost Cause”
by
Theodore F. Allen 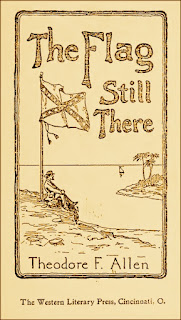 COL. ALLEN'S little semi-historical episode, originally published in “The Indicator: a Hesperian Leaflet," in 1901, attracted much attention throughout the United States, particularly in the Southern States, as indicated in the following, from the New York Sun of September 15, 1901:

RENFREW AND HIS FLAG.
THE CONFEDERATE SOLDIER WHO TOOK THE
STARS AND BARS TO A SOUTHSEA
ISLAND.

[From the Louisville Courier-Journal,]

''During the past few weeks General Basil Duke and General John B. Castleman have been overwhelmed with letters from old Confederate soldiers, asking them what they knew of the story of Henry Clay Renfrew, an ex-Confederate who carried away the last flag of the Confederacy, and escaped with it to the Navigator Islands. Renfrew was supposed to have been a member of the Second Kentucky Cavalry under General Duke. A reporter called on General Duke to learn the facts in the case.
'''No,' said the General, 'Renfrew's name has slipped my memory. I thoroughly believe the truth of the story. The fact that his diary shows him to have been in both the Second and the Fourth Kentucky Cavalry is a point that goes far toward establishing the authenticity of the tale. If it were simply a cooked-up yarn the author would never have thought to put him in two regiments."
'The matter of which flag he took must be a bit uncertain. You know, we old Confederates were so busy that we could not worry much about flags. I don't think I had a brigade flag. Renfrew probably got his company flag, as most companies had some emblem or pennon. “'I have talked to several of my men and they say they remember Renfrew perfectly. He came from somewhere near Midway. From what they tell me, he was a gallant soldier.'
"The reporter then hunted up one of the men, who was a private under General Duke. "'Renfrew?' exclaimed the old soldier. 'Of course I remember Renfrew. He was one of the finest fellows in the army. When I knew him he was about twenty-three years old and in Bart Jenkins' Brigade. Renfrew, Bayless and Mosgrove were mess-mates. They were all college graduates and naturally drifted together in the company. They messed together all the time. Every one of them was a brave soldier. Bayless now lives in Cincinnati. I know that Renfrew was in that last march as one of President Jefferson Davis' escort. Most of that last command surrendered at Mount Sterling. Some of them, however, tried to work west to join Kirby Smith. The command split and I lost sight of Renfrew. Bayless, of Cincinnati, could tell all about him.'
“The story is to the effect that out in the far Navigator Isles floats an old Confederate flag that has never been surrendered. And now, all over the country, old soldiers are rousing themselves and overwhelming General Duke with inquiries concerning the story of the young Kentuckian who bravely bore that flag, then willingly expatriated himself rather than surrender it. Four years he followed it, and then, for twenty-five more, it floated proudly unsurrendered before his hut on a little Pacific Island.
"Now private Henry Clay Renfrew, C. S. A., lies buried in a rocky headland of that far isle. He lies so, that, rising his face would look toward the East, toward the land of his youth and his love. And over the grave of the dead soldier floats the tattered battle-flag; the Stars and Bars for which he gave up home and friends and all that made life tolerable. The native who befriended him takes care of the grave.
''Captain Martin Schuyler, formerly Captain in the Seventh Ohio Cavalry, brought back the story from the Philippines. He told it to Colonel T. F. Allen, also of the Seventh Ohio Cavalry. Captain Schuyler met the native and from him learned the story of the flag. The native told him that many years ago an American, who said he had drifted along the western coast of South America, after passing through Mexico, settled in the Navigator Islands and lived alone, flying before his hut the Confederate battle-flag, which he said was carried by the cavalry escort that travelled with Jefferson Davis in the last stages of his flight from Richmond before his capture by the Federals. The ex-soldier said that he had escaped with the flag, which he loved too well to permit him to live again under the United States flag. The American refugee lived his isolated life for years, dying three years ago and leaving his flag to his native friend, with the injunction that he never part with it.
"Captain Schuyler finally got the native's permission to examine the dead American's effects. He found papers and diaries indicating that the ex-Confederate was Henry Clay Renfrew, a member of either the Second or Fourth Kentucky Cavalry, or both, in the Confederate Army. In some places he referred to Colonel Basil Duke, as the Colonel, and Captain John B. Castleman as his Caj)- tain; in others to Colonel Henry Giltner and Captain Bart Jenkins as his Colonel and Captain respectively. He wrote of Brainard Bayless and Dallas Mosgrove as his chums. In one of the diaries Renfrew referred at length to the last days of the Confederacy. Then followed the statement that he was with the last body of organized Confederate soldiers that escorted Jefferson Davis, General Duke commanding. And that when Duke's surrender was agreed upon, the writer took the flag from the staff, concealed it about his body and escaped, with the intention of taking the flag to some foreign land.'

In his charming book entitled ''The Little Shepherd of Kingdom Come," published since the above, Mr. John Fox, jr., the distinguished Kentucky author, having Col. Allen's episode of "The Flag Still There" in mind, makes frequent mention of "Renfrew the Silent,’ 1 and in one of the concluding chapters refers to the self-exiled Confederate soldier and his Unconquered Banner as follows:
''Renfrew the Silent was waiting at the smouldering fire. He neither looked up nor made any comment when General Hunt spoke his determination to surrender. His own face grew more sullen and he reached his hand into his breast and pulled from his faded jacket the tattered colors that he once had borne.
"'These will never be lowered as long as I live,' he said, 'nor afterward if I can prevent it.' And lowered they never were. On a little island in the Pacific Ocean, this strange soldier, after leaving his property and his kindred forever, lived out his life among the natives with this blood-stained remnant of the Stars and Bars over his hut, and when he died the flag was hung over his grave, and above that grave to-day the tattered emblem still sways in Southern air.'


Theodore F. Allen, The Flag Still There: An Antipodean Survival Of “The Lost Cause” (Cincinnati: The Western Literary Press, 1906), 7-26.