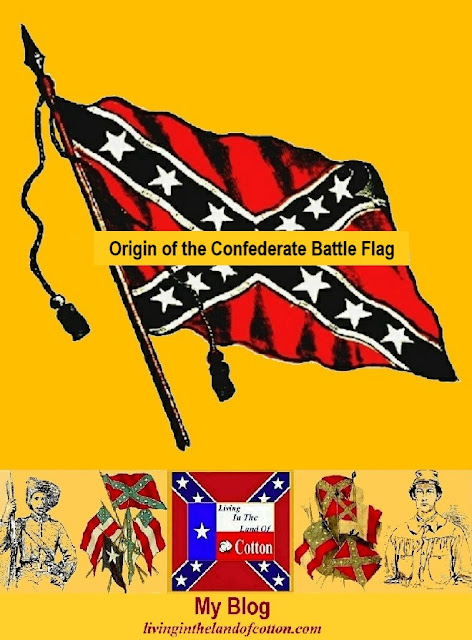 
[The facts concerning the origin of the battle flag contained in this article are derived from a speech by General Beauregard before a special meeting of Louisiana Division, Army of Northern Virginia Association, December 6, 1878.—EDITOR.] 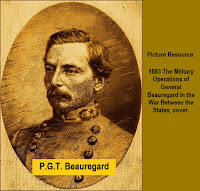 This banner, the witness and inspiration of many victories, which was proudly borne on every field from enemy. General Beauregard was momentarily expecting help from the right, and the uncertainty and anxiety of this hour amounted to anguish.

Still the column pressed on. Calling a staff officer, General Beauregard instructed him to go at once to General Johnston, at the Lewis house, and say that the enemy were receiving heavy re-enforcements, that the troops on the plateau were very much scattered, and that he would be compelled to retire to the Lewis house and there reform hoping that the troops ordered up from the right would arrive in time to enable him to establish and hold the new line.

Meanwhile, the unknown troops were pressing on. The day was sultry, and only at long intervals was there the slightest breeze. The colors of the mysterious column hung drooping on the staff. General Beauregard tried again and again to decide what colors they carried. He used his glass repeatedly, and handing it to others begged them to look, hoping that their eyes might be keener than his.

General Beauregard was in a state of great anxiety, but finally determined to hold his ground, relying on the promised help from the right, knowing that if it arrived in time victory might be secured, but feeling also that if the mysterious column should be Federal troops the day was lost.

Suddenly a puff of wind spread the colors to the breeze. It was the 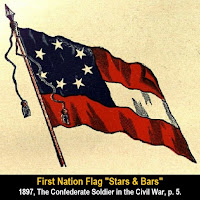 Confederate flag—the stars and bars! It was Early with the Twenty-fourth Virginia, the Seventh Louisiana, and the Thirteenth Mississippi. The column had by this time reached the extreme right of the Federal lines. The moment the flag was recognized Beauregard turned to his staff right and left, saying, “See that the day is ours!” and ordered an immediate advance. In the meantime Early’s brigade deployed into line and charged the enemy’s right—Elzey, also, dashed upon the field—and in one hour not an enemy was to be seen South of Bull Run.

While on this field and suffering this terrible anxiety, General Beauregard determined that the Confederate soldier must have a flag so distinct from that of the enemy that no doubt should ever again endanger his cause on the field of battle. 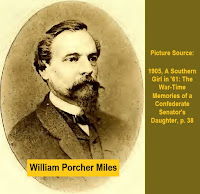 Soon after the battle he entered into correspondence with Colonel William Porcher Miles, who had served on his staff during this day, with a view to securing his aid in the matter, and proposing a blue field, red bars, crossed, and gold stars.

They discussed the matter at length. Colonel Miles thought it was contrary to the law of heraldry that the ground 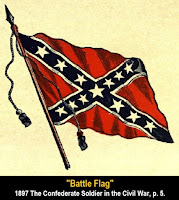 General Beauregard approved the change, and discussed the matter freely with General Johnston. Mean while it became known that the design for a flag was under discussion, and many designs were sent in. One came from Mississippi; one from J. B. Walton and E. C. Hancock, which coincided with the design of Colonel Miles. The matter was freely discussed at headquarters, till, finally, when he arrived at Fairfax Courthouse, General 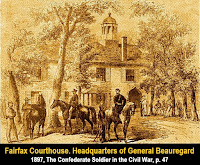 Beauregard caused his draughtsman (a German) to make drawings of all the various designs which had been submitted. With these designs before them the officers at headquarters agreed on the famous old banner—the red field, the blue cross, and the white stars. The flag was then submitted to the War Department, and was approved.

The first three flags received were made from “ladies’ dresses” by the Misses Carey, of Baltimore and Alexandria, at their residences 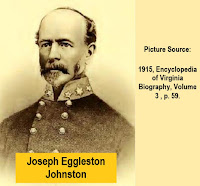 and the residences of friends, as soon as they could get a description of the design adopted. One of the Misses Carey sent the flag she made to General Beauregard. Her sister sent hers to General Van Dorn, who was then at Fairfax Courthouse. Miss Constance Carey, of Alexandria, sent hers to General Joseph E. Johnston.