Marginalia, or, Gleanings From An Army Note-Book by Felix Gregory De Fontaine 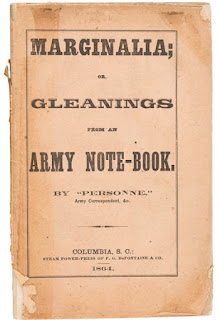 
"Let it be remarked," says the London Index, “that while all other nations have written their own histories, the brief history of the Confederates, already so full of imperishable glory, has been written for them by their enemies, or at best by lukewarm neutrals. Above all has the Confederate nation distinguished itself from its adversaries by modesty and truth, those noblest ornaments of human nature. A heartfelt, unostentatious piety has been the source whence their army and people have drawn their inspirations of duty, of honor, and of consolation. The North has produced no such man as Stonewall Jackson; and to Davis, Lee, and Longstreet, it can oppose only an Abe Lincoln, a Hooker, and a Pope. While on one side of the Potomac internal peace has never been disturbed, freedom of speech and of the press has never been impaired, and the rights of the citizens have remained sacred, though the body politic was straining in an agony of desperate  self-defense; on the other side of that stream, though no enemy's foot has yet trod the soil, a military despotism maintains itself by a reign of terror. Surely these are palpable facts which might weigh against unsupported slanders, whether clothed in the meretricious charms of fiction, or uttered by blasphemers of the Beecher and Cheever school.”

In the year 1834, M. Michael Chevalier, the distinguished political economist of France, was sent to the United States by M. Thiers, then Minister of the Interior, on the special mission of inspecting the public works of the country. But, extending his sojourn and enlarging of his observations, he spent two year in visiting nearly all parts of the then Union, and studying the characteristics of its social organizations and the working of its political machinery. His observations and impressions were communicated to the Journal des Dibats, in a series of letters, which were deemed of sufficient value to justify their transfer, subsequently, from the columns of that paper to a book. As the book is not of easy access, we make from one of his letters, written at Charleston, May 28, 1834, the following extract, showing the difference which he then discovered as existing between the two great people now at war:

“The Southerner of pure race is frank, hearty, open, cordial in his manners, noble in his sentiments, elevated in his notions; he is a worthy descendant of the English gentleman. Surrounded, from infancy, by his slaves, who relieve him from all personal exertion, he is rather indisposed to activity, and is even Indolent. He is generous and profuse. To him ‘the practice of hospitality is at once a duty, a pleasure, and a happiness. Like the Eastern patriarchs, or Homer's heroes, he spits an ox to regale the guest whom Providence sends him and an old friend recommends to his attention; and to moisten this solid repast, he offers Madeira—of which he is as proud as of his horses—that has been twice to the East Indies, and has been ripening full twenty years. He loves the institutions of his country, yet he shows with pride his family plate, the arms on which, half effaced by time, attest, his descent from the first colonists, and prove that his ancestors were of a good family in England. When his mind has been cultivated by study, and a tour in Europe has polished his manners and refined his imagination, there is no place in the world in which he would not appear to advantage, no destiny too high for him to reach; he is one of those whom a man is glad to have as a companion and desires as a friend. Ardent and warm hearted, he is of the block from which great orators are made. He is better able to command men than to conquer nature and subdue the soil. When he has a certain degree of the spirit of  method, and 1 will not say will (for he has enough of that), but of that active perseverance so common at the North, he has all the qualities needful to form a great statesman.
The Yankee, on the contrary, is reserved, cautious, distrustful; his manners are without grace, cold, and often unprepossessing; he is narrow in his ideas, but practical; and possessing' the idea of the proper, he never rises to the grand. He has nothing chivalric about him, and yet he is adventurous, and loves a roving life. His imagination is active and original, producing, however, not poetry, but drollery. The Yankee is the laborious ant; he is industrious and sober, frugal, and on the sterile soil of New England, niggardly  [Definition: means petty in giving or spending]. He is crafty, sly, always calculating, boasting even of the tricks which he plays upon the careless or trusting buyer, because he looks upon them as marks of his superior sagacity, and well provided with mental reservations to lull his conscience. He is little given to hospitality, or rather he displays it only on rare occasions, and then he does so on a great scale. He is a ready speaker and a close reasoner, but not a brilliant orator. For a statesman, he wants that greatness of mind and soul which enables a man to enter into and love another's nature, and leads him naturally to consult his neighbor's good, in consulting his own. He is individualism incarnate. But if he is not a great statesman, he is an able administrator, an unrivaled man of business. If he is not suited to command men, he has no equal in acting upon things, in combining, arranging, and giving them value.”