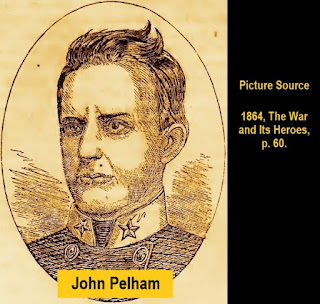 The "gallant Pelham," as he was styled by his commanding general, was a native of Alabama, and commanded the horse artillery attached to the cavalry division of General J. E. Stuart. He entered the army at the commencement of the war and was engaged in every battle fought in Virginia from the first Manassas, in 1861, to the battle of Keysville, March 17, 1863, where he fell mortally wounded, with the battle-cry on his lips and the light of victory beaming from his eye. The army correspondent of the "Illustrated News" thus notices the sad event: