Life in Dixie During the War by Mary Ann Harris Gay

Thursday, April 26, 2018
Life in Dixie During the War
by
Mary Ann Harris Gay 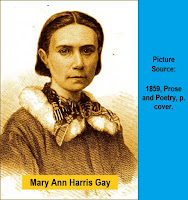 Chapter I
The Magnolia Cadets

Notwithstanding the restful signification of "Alabama," the State bearing that name "had passed the ordinance of secession, and mingled her voice with those of other States which had previous'' taken steps in that direction.

Then followed a call for a convention, having in view the election of a President of a new Republic to take its place among the nations of the earth, and to be known throughout the world as the Southern Confederacy. As an intensely interested spectator I was at that convention; and will remember, to my dying day, that grand spectacle. Yea, that was a grand and solemn occasion—that of issuing a mandate "Let there be another nation, and there was another nation." In the course of human events it requires centuries to evolve such moral courage, and sublimity of thought and action; and, the proceedings of that dsij will stand out in bold relief as the acme of patriotic greatness.

Ah! that scene at the capitol of the State of Alabama, when Jefferson Davis, the chosen leader of the Southern people, took the oath of office and pledged undying fidelity to the best interests of his own sunny land.

On that momentous occasion not a word was tittered denunciatory of the States we were seeking to leave in their fancied superiority, and the great concourse of people there assembled was too familiar with the history of the times to require recapitulation of the causes of the alienation which led by rapid ascent to the summit of discontent, and determination to no longer submit to the domination of an enemy.

That scene being enacted as a preliminary, a call was made for Alabama's quota of volunteers to defend the principles enunciated and the interests involved. The Magnolia Cadets, under the leadership of Captain N. H. R. Dawson, of Selma, were among the first to respond. I accompanied my cousins of Alabama to see this company of noble, handsome young men mustered into the military service of their country.

It was a beautiful sight! Wealthy, cultured young gentlemen voluntarily turning their backs upon the luxuries and endearments of affluent homes, and accepting in lieu the privations and hardships of warfare; thereby illustrating to the world that the conflict of arms consequent upon the secession was not to be "a rich man's war and a poor man's fight."

I saw them as they stood in line to receive the elegant silken banner, bearing the stars and bars of a new nation, made and presented to them by Miss Ella Todd and her sister, Mrs. Dr. White, of Lexington, Kentucky, who were introduced to the audience by Captain Dawson as the sisters of Mrs. Abraham Lincoln, the wife of the President of the United States.

I was thus made aware that Mrs. Lincoln and her illustrious husband were Southerners. I have since been in the small, mud-chinked log cabin in Elizabethtown, Kentucky, in which he was born, and in which his infancy and little boyhood were domiciled. Mrs. White had married an Alabamian, and as his wife became a citizen of his State. Her sister, Miss Todd, was visiting her at the enactment of the scene described, and, under like circumstances, also became a citizen of Alabama. She married the valiant gentleman who introduced her to the public on that memorable occasion.