Facts the Historians Leave Out: The Youth's Confederate Primer by John S. Tilley 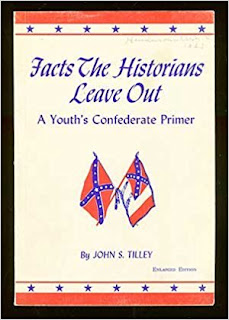 Was the War of the Sixties Fought Over the Issue of Slavery?

Did the North fight the war to free the slaves? That is a fair question. Maybe, you have come to believe that such a motive inspired the terrible struggle. But, was that the cause? Of all the leaders of that period, who do you think best qualified to know the true answer? Would not it have been Abraham Lincoln? And, what do we learn from him? He had served in Congress with Alexander H. Stephens of Georgia. On December 22, 1860, just two days after South Carolina left the Union, he wrote to Mr. Stephens: “Do the people of the South really entertain fears that a Republican administration would, directly or indirectly, interfere with their slaves, or with them about their slaves? If they do, I wish to assure you, as 8 once a friend, and still, I hope, not an enemy, that there is no cause for such fears.” On the next fourth of March, he became President. Had he changed his mind? Just after he took the oath of office, he said in his inaugural address: “I declare that I have no intention, directly or indirectly, to interfere with slavery in the States where it exists.” Not only that. In 1862, when the war had been in progress for more than a year, Republican senators urged him to take action to free the slaves. He answered: “Gentlemen, I can’t do it.... But I’ll tell you what I can do; I can resign in favor of Mr. Hamlin. Perhaps Mr. Hamlin could do it.” There is the record. Was Mr. Lincoln, then, in favor of slavery? He was not. He believed it to be wrong and was opposed to allowing it to expand into new States; but, he thought he had no right to interfere with it in the States in which it already existed.

Did the Southern Armies Fight to Preserve Slavery?

Robert E. Lee was the South’s leading General. Not only had he freed the slaves under his control, but he had declared that slavery was “a moral and political evil.” It was his view that “the best men in the South” opposed the system, and that they would welcome a sane movement to be rid of it. He was convinced that, in time, “the mild and melting influence of Christianity,” rather than war, would solve the problem. Stonewall Jackson agreed with Lee’s view. He wished to see the shackles struck from every slave. So, clearly, these great leaders of the Confederates were not fighting to retain a system which they hated. What of the soldiers who marched behind Lee and Jackson? Bear in mind that only one in fifteen of 10 Southern whites ever owned a slave. All in all, there were fewer than 350,000 Southern slave-owners. But there were some 600,000 soldiers in the Confederate armies. So, if all the slave-owners were in uniform — and, certainly, they were not — this still leaves several hundred thousand soldiers with no personal interest in slavery. What were these non-slaveholders fighting for? You have read of John Brown who defied the law, attacked and occupied the armory at Harper’s Ferry. He was captured by United States Army forces led by a Virginia Colonel by the name of Robert E. Lee. His execution took place in Virginia, a State presided over by Governor Henry A. Wise. It may interest you to learn that, not only the Virginia Colonel and the Virginia Governor, but a majority of the people of Virginia were then sincerely opposed to slavery. Southern opposition to slavery was not something new. Daniel Webster once declared that the leading spirits of the South regarded it as “an evil, a blight, a scourge, and a curse.” He might have called the roll, a roll including such names as George Washington, Thomas Jefferson, James Madison, James Monroe, George Wythe, Richard Henry Lee, Patrick Henry, John Randolph, and George Mason.