Christ in the Camp, or, Religion in the Confederate Army by John William Jones

Thursday, April 26, 2018
Christ in the Camp, or, Religion in the Confederate Army
by
John William Jones 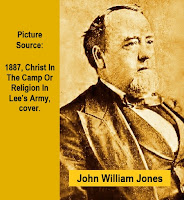 General Jackson had Rev B. T. Lacy commissioned chaplain (not "corps chaplain," as he has been improperly called, for there was no such rank; and, indeed, Confederate chaplains had no military rank whatever, but were all on the same footing of equality as simply preachers and spiritual leaders of their commands), and ordered to report to him for duty, and he assigned him to preach at his head-quarters and labor in the more destitute commands of the corps. Dr. Lacy was a genial gentleman, an indefatigable worker, and a powerful and effective preacher, and his association with General Jackson gave him special influence and a wide field of usefulness. Some of the services at Jackson’s head-quarters were of deep interest and wide-reaching in their blessed results.

Upon one occasion, I called at Jackson's head-quarters and found him just going in to a prayer meeting which he was accustomed to hold. I gladly accepted his invitation to attend, and shall never forget the power, comprehensiveness, and tender pathos of the prayer he made during that delightful prayer meeting.

Only a few days before the battle of Chancellorsville, I had the privilege (in company with several brother-chaplains) of dining with him at his mess, and of lingering for an hour of most delightful converse in his tent. Military matters were scarcely alluded to, and then he would quickly change the topic; but we fully discussed questions pertaining to the promotion of religion in the camps—how to secure more chaplains and to induce pastors to come as missionaries to the soldiers, and kindred topics. And then we got on the subject of personal piety, the obstacles to growth in grace in the army, the best means of promoting it, etc., and as the great soldier talked earnestly and eloquently from a full heart, I had to lay aside my office as teacher in Israel and be content to "sit at the feet" of this able theologian, this humble, earnest Christian, and learn of him lessons in the Divine life. More than almost any man I ever met, he accepted fully the precious promises of God's word, walked by a living faith in Jesus, and was guided by the star of hope as he trod firmly the path of duty. How far the glorious revivals with which we were favored were in answer to the prayers, and in blessing on the efforts of "Stonewall" Jackson, and to what extent his influence was blessed to individuals, eternity alone can reveal. I have it from a well-authenticated source that the conversion of Lieutenant-General Ewell, Jackson's able lieutenant, was on this wise : At a council of war, one night, Jackson had listened very attentively to the views of his subordinates, and asked until the next morning to present his own. As they came away, A. P. Hill laughingly said to Ewell, "Well! I suppose Jackson wants time to pray over it." Having occasion to return to his quarters again a short time after, Ewell found Jackson on his knees and heard his ejaculatory prayers for God's guidance in the perplexing movements then before him. The sturdy veteran Ewell was so deeply impressed by this incident and by Jackson's general religious character, that he said: "If that is religion, I must have it;" and in making a profession of faith not long afterwards he attributed his conviction to the influence of Jackson's piety.